Before I came to UMass, I spent a season working as a historical interpreter at a living history museum. Every morning I put on two petticoats, my dress, and a bustle, and drove to work. Throughout the day, I talked with visitors about the temperance movement and women’s rights in the 19th century. During breaks, I took pictures of juneberry pies that I had just baked in the wood stove. I brought out the coffee container in the museum’s collections that came from my hometown, 530 miles away, but visitors rarely saw. After I swept the dust off of the front porch and let the embers die down in the stove, I posted the pictures to Twitter, using the hashtag #ITweetMuseums. On my days off, I visited local historical societies and museums, tweeting all the while. By tagging my tweets with the hashtag #ITweetMuseums, my museum experiences became accessible to people who ordinarily would not have had a chance to visit these museums. When I couldn’t venture out to new museums, I scrolled through my own Twitter feed, searching for #ITweetMuseums tweets that transported me to museum exhibits miles and continents away.

Throughout Professor Marla Miller’s “Writing History Beyond the Academy” seminar, we have discussed the ways in which historians can use Twitter to their best advantage. From a visit by Lee Badgett, professor of economics at UMass and author of The Public Professor, we discovered that being on Twitter can be beneficial in making connections, and those connections can be essential in discovering ways to make your research benefit the greater good. From talking with Rebecca Onion, Slate.com’s history writer and the department’s Writer-in-Residence (whose public lecture “Truth, Lies, Clicks, and Shares: How History is Faring on the World Wide Web” can be viewed here), we’ve learned that people are engaging with history in all sorts of new ways on Twitter and elsewhere on the internet.

Earlier this semester, the department hosted Mark Schlemmer, the founder of I Tweet Museums. I Tweet Museums’ mission is to “encourage and support museum staff to tweet museo-relevant content from their personal Twitter accounts.” Schlemmer, the registrar at the New York Historical Society, is inspired both by his own work and the work other museum professionals do on a daily basis. He created I Tweet Museums as a platform for museum professionals to share what they are naturally impassioned about in their day-to-day work. 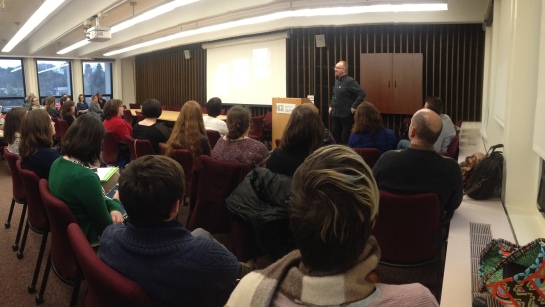