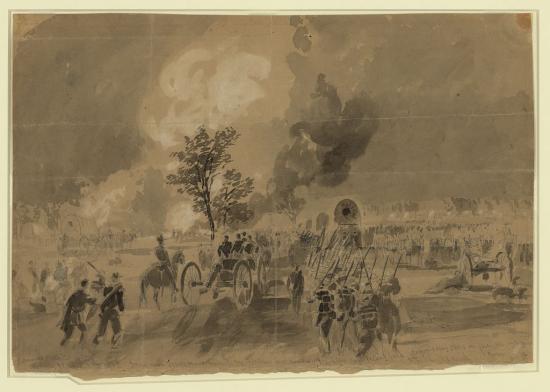 Andrew Roy was one of over 275,000 northern soldiers wounded in the American Civil War—although he avoided amputation, unlike more than 20,000 fellow comrades who wore the Union blue. Following the death and destruction of the war, survivors faced the difficult task of finding significance in their suffering and sacrifice. Northern civilians and wounded veterans of the Federal Army offered an array of responses to the nation’s anguish through ritualized commemorations in the ensuing decades. Two dominant portrayals of disabled veterans emerged: pitiful cripples and a more popular version depicting the wounded as the epitome of masculine patriotism. Scars, limps, and amputations were honorifics that symbolized the Union man’s character as an individual who had sacrificed dearly to preserve the Union.

Religion helped to define public perceptions of wounded veterans, suggesting that a soldier’s torment was ordained by a higher power for the national good. As Henry Palmer wrote in a handwriting competition for Federal soldiers who had lost a dominant hand:

“My right arm, as if conscious of approaching dissolution, seemingly bequeathed unto the left arm, all the properties of which it died, seized and possessed.  The seal of this Last Will and Testament was the bloodseal of amputation—Patriotism, Love and County, and Equal Rights were the subscribing witnesses to the instrument—The body from which the arm was severed, was the Executor—In Heaven’s Court, the will was proved, allowed and recorded.” 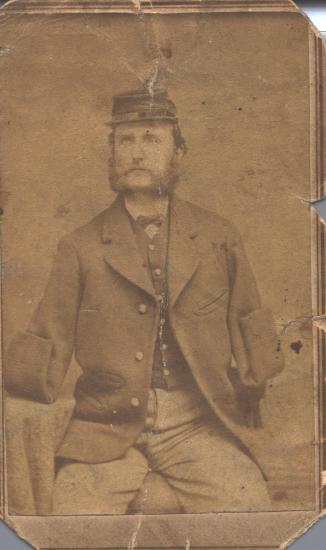 A carte-de-visite featuring a wounded veteran of the Union army taken some time during the 1860s. Many veterans with a visible, permanent wound would pin their shirt and/or pant sleeves together instead of opting for free artificial limbs that were considered very uncomfortable.

Despite the misery, Union veterans attempted to demonstrate self-reliance. Perhaps the greatest example of independence was Major General Oliver Otis Howard, who rose to become the head of the Freedmen’s Bureau after the war. Veterans argued that their injuries encouraged increased social and economic independence, and some used their wounds for political leverage. Lucius Fairchild, who received an amputation after being seriously wounded during the Battle of Gettysburg, won the Wisconsin gubernatorial election of 1866 and became a prominent veteran-affairs spokesperson for former members of the Federal Army. As such, scarred veterans as virtuous harbingers appeared in the popular culture for a public concerned about the profound effects of the war on wounded soldiers. “The Empty Sleeve: A Song with Chorus” by P.A. Hanaford and Reverend J.W. Dadmun of Boston, Massachusetts, was a popular sheet music written in 1866. Its chorus venerated Civil War veterans:

“Three hearty cheers for those who lost

An arm in Freedom’s Fray

And bear about an empty sleeve

But a patriot’s heart today.”

The lyrics correlate physical sacrifice and triumphant patriotism. This righteous empty sleeve iconography was not equally bestowed, however. African American veterans went unacknowledged, and were barred from most veterans’ organizations. Veteran Will Thomas, who participated in the same contest as Henry Palmer stated, “I don’t expect to win a position as a clerk, that being ascribed on count of my color.” Thus, at least within the confines of northern society, the physical changes that black veterans like Thomas suffered were largely ignored by the community. Listen to the song here. This post’s headline also comes from the song’s lyrics. 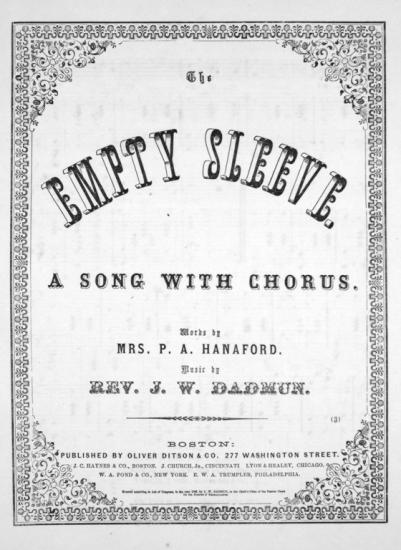 The sheet music, “The Empty Sleeve” created by P.A. Hanaford and Reverend J.W. Dadmun, circa 1866, in the museum’s collection.

While many men spoke of their injuries in a variety of ways, many more remained silent about the nature of their wounds. While some wounded veterans celebrated personal success later in life, others endured a lifetime of hardship. Roy did not say how his wound affected his patriotism despite professing great esteem for the late Abraham Lincoln in a speech given several decades after Lee’s surrender to Grant in Wilmer McLean’s parlor. The stories circulated by thousands of northern veterans and civilians illustrated the complex post-war psyche that attempted to explain the presence of the permanently wounded soldiers who had served in “Mr. Lincoln’s army.”

Note: The phrase has been borrowed from the first book in Bruce Catton’s trilogy chronicling the history of the Army of the Potomac.

Matt Coletti is a graduate student in the Public History Program at the University of Massachusetts Amherst. His academic interests include the public memory and contemporary collective interpretations of the American Civil War, as well as the psychological repercussions of war on individual and community life in a historical context.