Margo Shea completed an M.A. in Public History in 2005 and a Ph.D. in History in 2010 (both from UMass Amherst), with specializations in public history and memory, Irish history and Urban history. She is currently an assistant professor in the History Department at Salem State University, in Salem, Massachusetts. Shea is currently revising her doctoral dissertation, “Once Again it Happens: Collective Memory and Irish Identity in Derry, (Northern) Ireland 1896-2008,” for publication.

On Tuesday, May 6th, Boston College’s Director of Public Affairs, Jack Dunn, announced that “The Belfast Project” oral history initiative would honor all requests from participants to return recordings and transcripts of interviews not currently in use as evidence in the murder investigation of Jean McConville, a Belfast widow abducted and murdered by the IRA in 1972. The college will keep no copies. The information in the interviews will remain known only to the interviewers, a few Boston College employees, and William Young — a federal district court judge who read the transcripts to determine which ones should be delivered to Northern Irish authorities under a treaty governing exchanges of information between nations for the purposes of law enforcement.

Boston College’s decision came on the heels of events last week, when the Police Service of Northern Ireland held Sinn Féin leader Gerry Adams for questioning about his involvement in the McConville murder. Evidence came directly from “The Belfast Project” interviews. The move by the PSNI invited new scrutiny on an oral history project that has already been the focus of very public controversy, as Beth McMurtrie laid out in her detailed investigative piece published last January in The Chronicle of Higher Education.

News that the recordings and transcripts would be returned was surely met with relief by former republican and loyalist combatants who had agreed to share their stories from the front lines of Northern Ireland’s Troubles — a thirty-year period of political turmoil and civil violence which left 3,700 people dead and approximately 10,000 injured. Those interviewed had been promised confidentiality in exchange for honesty. Interviewees revealed information about activities “the dogs on the street” may have known about, but which were rarely discussed on the record. 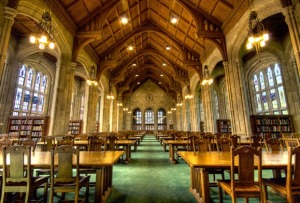 For Anthony McIntyre, the former republican prisoner and scholar who conducted interviews with fellow ex-combatants, the public announcement was a “symbolic washing of the hands” on the part of Boston College, a way to distance itself from criticism emerging about the project. Despite having been cast adrift, McIntyre and others closely associated with the project agree that the information on the recordings was not safeguarded well.

While the case has implications for a wide scope of scholarly research, oral historians in particular have been watching the situation closely since 2011, when information from the interviews was first subpoenaed on the basis of material that project co-director, journalist Ed Moloney, included in his book Voices from the Grave: Two Men’s War in Ireland. Moloney’s use of interviews by former IRA Belfast Brigade commander Brendan Hughes was in accordance with contracts signed by each interviewee forbidding access to interviews until after a participant’s death. Hughes died in 2008; however, many of the people he discussed on the record remained very much alive.

An increasingly public and vitriolic disagreement has taken place about who is to blame for the exposure of paramilitary secrets, heating up over the past week when Northern Ireland’s republican community reacted to Adams’ arrest. They slammed “The Belfast Project” as a vehicle for former republicans disgruntled by the way the peace process unfolded to air dirty laundry, lionize themselves and castigate their enemies within the movement. McIntyre has long been a vocal opponent of both Gerry Adams and post-1998 republicanism, fueling these suspicions. 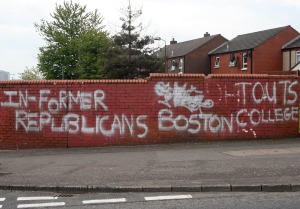 The project director, Moloney, and interviewers, McIntyre and Wilson McArthur — who have no professional experience with higher education institutions — say they took Boston College at its word that the material would remain confidential. They believed the college would be an honest broker and that BC’s Burns Library Special Collections would not only process, catalogue and preserve the collection, but would keep the information it contained confidential. College spokespeople say that project directors knew from the start that the information would only be protected as “far as American law will allow” and that Bob O’Neill, head of the Burns Library, specifically indicated that it was not clear the commitment to protect the information could withstand a federal court subpoena.

The question remains: What can oral and public historians engaged in collecting and interpreting histories about controversial, divisive and difficult issues and events learn from “The Belfast Project” and its fallout?

First, if you are serious about collecting and archiving sensitive historical material, put your publishing ambitions aside for the time being. Ed Moloney’s use of information provided in Hughes’ interview and his discussion about it it with a Boston Globe reporter in 2010 (Thomas Gagen, “Adams’ Secret, Now His Shame,” The Boston Globe, January 07, 2010) opened up this can of worms.

Next, when addressing controversial histories, it is even more important to remember that interviews are not objective, disinterested, or omniscient sources. We all know this, but in this case, the media keeps forgetting it. Obsession with “what is on the tapes” obscures the larger issues around collecting histories in conflict and recent post-conflict zones, let alone the interpretative challenges of working with oral testimony.

Third, in cases like this one, the institutional review board (IRB) is your friend. Establishing protocols and taking the necessary precautions to locate control of materials with the interviewees, instead of with the institutions, probably would have made a difference in this case, where interviewees didn’t have final say on edits, redactions, deletions, pseudonyms or anonymity, etc. They talked, and that was that. Getting involved with high-stakes history means taking seriously that, well, the stakes are high.

Finally, the critical lesson I take away from this is an affirmation of our priorities as public and oral historians: Trust matters. So does process. All the players in the Boston College case got involved for different reasons and wanted different things from the project. Understanding and identifying partners’ motivations is a necessary prerequisite for endeavors like this. It is only through this process that those involved can gain a clear understanding of the stakes involved and the breaking point at which commitment to the project and to the relationships that sustain it might falter. As this case proves, sharing authority is no simple proposition and the tools required to do with integrity are not reflexive or intuitive. The fragile and failed relationships between project administrators, researchers and interviewees in this case should be a cautionary tale for us all.